Our lesbian sexpert Jancy Richardson is here to bring you some genuine advice about the best lesbian sex toys to use. WARNING: things may get a little ~spicy~!

Hello, fellow lesbians. Whether it’s for Pride month or you just want to enjoy the sheer variety of buzzing, thrilling delights that the internet has in store for you (and your girl(s), perhaps), check out some of the best ever lesbian sex toys online. Discovering We-Vibe was, well, a whole vibe, to be honest. All of their toys are super high-end, so don’t be put off by the price tag. A sex toy goes in your actual pussy so you want something good quality. All We-Vibe toys are made from silky smooth, easy-clean, ultra-hygienic silicone, and they’re rechargeable so they’re better for the environment. They’re also just really gorgeous to look at, all lush colors and abstract, ergonomic shapes – some you could even get away with leaving out in your apartment and not worry about visitors’ eyeballs popping out.  Remember lesbians – always use water-based lube with a silicone toy. Let’s get wet…

We-Vibe Rave may not look the most inspiring vibe out there but it’s actually astonishing once you get it going. It just looks like a wonky dildo but there’s something about the shape of it that really hits the spot. Rave is a G-spot stimulator, so lube it up and slip it in. You can get a decent ramming out of it but where it really shines is turning up the vibrations while you use another vibe – or Melt – on her clit. Major squirt potential, not even kidding, get the towels ready because this one is an absolute mattress-ruiner. Sometimes having something inside you is, like, hmmm, OK, that’s nice, but Rave is more oooohhh, okkkaaayyy then, yep. Yep. Yeah. Again, not very poetic but it just locks in place really effortlessly and helps you hit the clit from both sides in a way that makes the edges of your vision start to sparkle. The vibrations feel even stronger if you clench onto it inside, which is super intense and helps to tip you over the edge when you’re coming.

Right, I say “tease her” but Touch X is pretty powerful for such a tiny little thing. It’s a really cute little teardrop shape with both a flat and a gently pointed edge so you can choose the angle and precision you target the clit with. I guess you could run it sensually over her body and tease her nipples but, to be honest, you’re probably going to want to press it into her clit and turn the intensity up because that’s where Touch X really shines. A cute, subtle shape in some gorj colors – Crave Coral and Green Velvet – Touch X is aesthetically as well as clitorally pleasing. If you’re interested in more of a classic bullet vibe, We-Vibe’s Tango X is another of the best sex toys for lesbian couples. The reliable lipstick shape has a slanted tip for devastating accuracy on the clit, or you can use it to tease her opening until she’s going wild. Tried and tested, these small-but-mighty vibes are great for travel or for clit play at home.

We-Vibe Moxie is aptly named – if you’re feeling bold and looking for some alfresco thrills, Moxie is a tiny, wearable clit vibrator that slips into the underwear and is held in place with a little magnetic clip on the other side of the fabric. You can then use the remote (or more likely, the app, for subtlety) for discreet thrills in public. Picture it – you’re on a long flight, or out for a romantic dinner or cottagecore picnic, and with a few sneaky taps of your phone, you can send vibrations directly to her clit. Pretty cool. It’s super quiet so nobody is going to notice its gentle buzzing underneath the background noise. It’s surprisingly powerful for something so small, but this more of a mood-setter for teasing and tantalising until you can get home and really bang it out, but you could totally work up to climax with Moxie too.

Most We-Vibe toys are also app-enabled, so you can play over long distance (for all of you chronic yearners that aren’t interested in a girl unless she lives over 2,000 miles away). It’s also cool to cycle through the intensity levels and vibration pattern settings with the simple tap of a phone screen rather than desperately fiddle for slippery lubed-up buttons in the heat of the moment. Oh, ALSO – there’s a feature on the We-Vibe We-Connect app that lets you sync the vibrations in time to music of your choice, so you can punish her clit to the dulcet tones of girl in red (I’m sure she’d approve) or you could be a little troll and play some really unsexy music. The comedic potential of having your vibrator merrily buzz along in time to the macarena just can’t be missed. 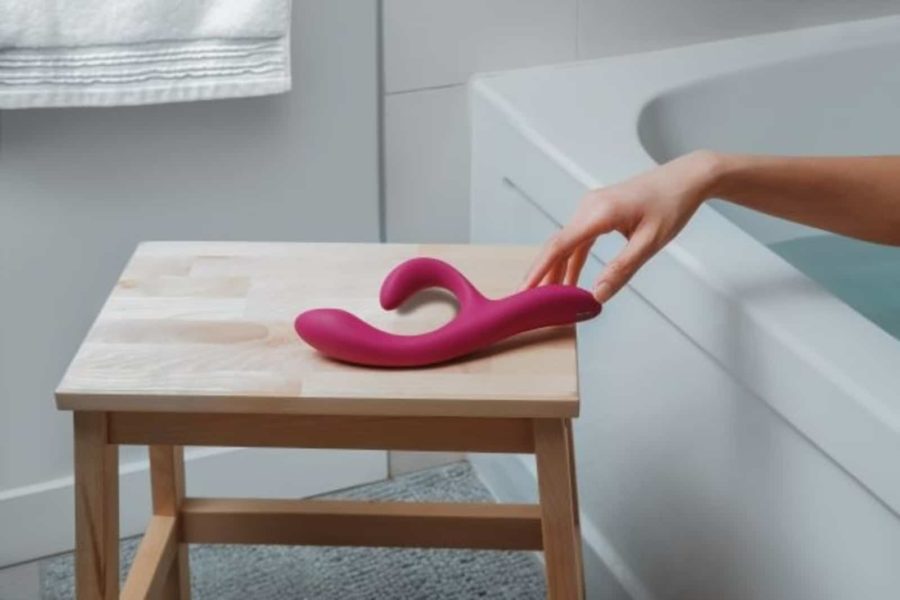 Watch her – Nova 2 or Womanizer DUO

Nova 2 boasts that it’s “beyond the classic rabbit vibrator,” and it really is. It’s a gorgeous design, like a fancy fascinator in sleek silicone, but even better, it really delivers dual stimulation. The internal arm hits the G-spot while the external arm maintains constant contact with the clit, so you can watch her please herself or let her lie back and do the work for her. Watching someone else get off is always super hot, and Nova 2 has the power and intelligent design to make it really effortless, too. The internal arm is adjustable so it fits to different bodies, and there’s a low power alert so you won’t run out of juice unexpectedly. Still, most We-Vibe toys give a couple of hours of play time from a full charge so that’s a pretty decent stretch even for an elongated sapphic sexathon. Meh, just swap out different toys if the battery runs out on ya. There are other fancy features, such as the travel lock, which means it won’t accidentally turn on in your backpack in transit, but the real star of the show is the wild blended orgasms. Nova 2 hits the clit from both sides, giving that acute clitoral pleasure and satisfying internal climax simultaneously. If you like to do G-spot and clit stimulation separately, Nova 2 can do that too – the two motors are separately controllable using the buttons on the toy or on the free We-Connect app.

Same for Womanizer DUO. This rabbit comes with some exciting features. You want to have fun somewhere where you shouldn’t be caught? No problem with Smart Silence. This function ensures that the toy only starts when it comes into contact with the skin. If you take it away, it falls silent. In addition, Pleasure Air technology combined with intense vibrations provides unforgettable moments. Whether in pairs or alone, it’s up to you.

For many years, tattoo model Victoria van Violence suffered from depression. Now, she creates ethical fashion under the slogan “Member of the self-care club”.

Cuffing Season? Not for emancipated women it isn’t!

There is now another new term for us to learn: “cuffing season”. We explain what this term means and why it’s not for everybody.

Forget good old missionary! You should try these sex positions this month

First things first: Sex is not a competitive sport.

Asking for an open relationship: when monogamy is not your thing

Our writer is not in a monogamous relationship; at least not anymore. She believes that pairing up for life can do more damage than good to a relationship, and she’s not alone. Couple’s therapist Lisa Fischbach even wrote a book on the issue.

Breakup sex: Is it ever a good idea?

Break-up sex is captivating and it’s pretty common to find yourself having sex with your ex. Is it ever a good idea?

Jancy is a writer based in Berlin. Her motto for life is “Be Gay, Do Crime.” Horror movies, tattoos, drawing and LGBTQI+ culture and sexual empowerment are her favorite things in the world. She's been to over 60 countries and had various spicy accoutrements confiscated at airports around the world. Yes, she listens to Girl in Red.

Subscribe now for the newsletter from our Womanizer friends and get 5% off for your purchase!

Subscribe now for the newsletter from our Womanizer friends and get 5% off for your purchase!